Wising Up, Dressing Down

Five poems from Edward Mackinnon's first collection Wising Up, Dressing Down:
Almost Like Joe Meek's Blues | St Kilda | Other Tongue
Unimpeachable | What We Want In Art

It was in those days after Holly and the music died, when pop
was in a slump. He contrived to get songs that were crap to the top
of the charts. His name was in Melody Maker nearly every week
and it seemed to me in my grammar school days as though Joe Meek
produced every other hit. I pictured him raking in the lolly,
a sharp lad on the make, living it up in London, with a dolly
bird on each arm. But like fluff blown off a stylus he disappeared
without a trace. In any case, the music business was now geared
to a new sound: the Beatles and the Stones. Pop started to boom again.
I was going up to Cambridge. The swinging sixties could now begin.

He blew his brains out while I was there. But at the time I never read
the half-column on the inside page. I found out long after he was dead
that Joe was no flash Harry, but a slightly gauche and moody queer
who had been twiddling knobs since boyhood, an ace recording engineer
who spoke in soft Cambridgeshire tones and lived in a modest pad
in Holloway where he built his studio. People thought him half-mad
as he trailed microphone cables to the bathroom, but this was the ground
on which he waged his private battle, creating his own distinctive sound
and taking on Tin Pan Alley. He won and lost. They were unforgiving.
Working with show biz pseuds must have been even worse than living

in Cambridge, where as a pimply youth in incongruous black gown
I played at being an undergrad, and the grey streets of the town
brooded like the Bergman films I went to see, and girls were rare.
But he was more of a misfit than me, for he had no-one to share
and sustain that dream from which all pop music starts. I had the luck
to have friends who helped me survive the Cambridge blues, and so I stuck
it out and got my degree. All he had was a lonely pride
in what he had achieved. In the end there was nowhere to hide
after being found guilty of importuning. He died of shame.
Poor Joe was queer, not gay. The swinging sixties never came.

The better worlds too are not without blemishes.
Ill winds blew from all directions, the worst of them
a consequence of their diet of fat bird flesh.
But they let one wind contend with another
and let neither detract in the least from the pleasure
of al fresco democracy, the euphonious
sound of almost endless debate that was an end
in itself, the spiritual counterpoint to the need
to find food and such animal pleasures as ensued,
rest and respite from the giddy heights of the cliffs and stacks.

Nature defined them and they found it natural
to hold in common the means to life: the land
and what it bore and what was borne on the air:
feathers and flesh, eggs and oil and entrails of birds.
Nothing was wasted. For all was won together,
in a balancing act, just as brides were won
by suitors perched on a heel high above sea
on a stone, fitness for life and the wedded state
being one and embodied in thickened ankles
and prehensile toes that were the hold on their very existence.

Gannets, puffins, fulmars. Feathering their beds,
keeping lamps lighted, fertilising fields, and
all the time a store of salted carcasses
laid up in the cleitean to be shared. This was justice
indeed and crime unknown. Do you understand?
No such thing as crime. And nobody in thrall
to another man or woman, for the landlord
was like a god and absent for ever,
sending his minion but once every year
to take rent in avian kind back across the hazardous sea.

One day there came a steamship with strange people
bringing knowledge of markets. A world opened up
beyond theirs. And they put messages in bottles,
then trawlermen carried the word and later still
radio waves travelled over the sea waves,
and they were lost. They came within the compass
of the calculating world with its corpus
of laws and its religious integument.
They began to see themselves through others' eyes,
their children lulled with tales of another and better life.

Ill winds blew from all directions and they learned
what they could about saviours and sinfulness,
though their ways were ingrained and unreceptive
to crime. But the ropes that held them together
lay ravelled too long and their ankles grew thin.
At last they became a pure anomaly,
a just perceptible blot on the books
of the integral world. Their island was left
to the birds and what they left behind was lost,
to be stored in the cleitean of the afterworld's mind and preserved.

It is my mother's tongue,
multiforked.
Before she was born
it had insinuated itself
like a serpent's
in black water
in a place it called Fermoy.

From my father I learned
how rich it is.
How it outspoke other tongues
from Kiltarlity
to Wounded Knee.

I was well schooled in it:
Here's the carrot of becoming
an anglospeechified top dog,
here's the stick to beat the boy
from the Scots-Irish bog.

I speak it in neutral tones,
unnaturally.
I shall always be tongue-tied.
I have only this other tongue
that cannot be unlearned.

I have only this language
imposed on me like a birthmark.
Its strange sounds brand me,
its blameless words.

The discordance of public discourse pains.
We know too well the rogues' fine suits and furs
hide stark naked untruth. But we're bound by chains
of office they wear. A vague protest stirs

inside us. We realise that the non-sense
loosed on the land is the language of the pricks.
But console ourselves that however dense
its structure, we can dismantle the bricks


to reveal a bedrock of mendacity.
We miss the point. The distinction between fact
and fiction is no more. Their capacity
for self-serving is nothing but an act,

consummately performed. This art's protection
from all probings. We ask what's hers, what's his.
Is it possible to make a connection?
They answer: It depends what you mean by 'is'.

WHAT WE WANT IN ART

In art we want, as well as truth, an inkling of otherness, a sense
of longing for a better world. Whereas in life we fall short,
hard as we try. We may care that corporate America’s wealth
derives from those such as the Indian left to die like rotting fruit
in Neruda’s poem The United Fruit Co. But our anger
dies too. The composer Theodorakis must have known this,
for in his musical setting of the poem he chooses to render
the death of this nameless thing, this fallen cipher, incongruous
though it may seem, as a joyous climax of celebration.
In the poem it is cruel but truthful irony, and brings
to an end the portrayal of a continent’s degradation.
The composer takes the poet’s bitter words and gives them wings.
In his music-poem death becomes its own antithesis.
The Indian’s dying is transformed into a triumph over death.
Thus, an all-transcending victory is won. And we get justice.
But only, of course, in the work of art. Where we want the truth.

Five poems from Edward Mackinnon's first collection Wising Up, Dressing Down:
Almost Like Joe Meek's Blues | St Kilda | Other Tongue
Unimpeachable | What We Want in Art 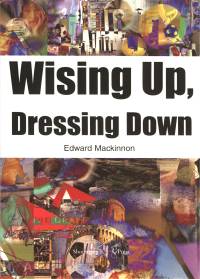