Five poems from Edward Mackinnon's second collection Killing Time in Arcadia:
The Sound | Symbol of a Nation | Ballad of Robert Johnson
The Wager | The Gateway

It travelled mysteriously, via Clovis, New Mexico
to Dullsville, Lincs from Lubbock, Texas and without radio;
you heard it by chance through an open window, a form of motion -
guitar riff, voice, sweet explosion - and you hadn't the least notion
who it might be, mere clues on the vinyl but how could you know
who Hardin was, no newscast told you he was in love with Echo
and wore glasses and was white but toured with blacks and all was well
till the bus went south. A seven-mile ride to school was the only hell
you knew, sickness and chill, this was England, to get a fire to start
you had to put a coin in a slot in its unwilling heart
that denied the hot gospel of love. All your longings were fed
by the sound. It would throb through puberty. It was flesh that bled
through electric strings, it was masculine tenderness, unstrained.
But it moved too fast, only light was faster, and the bus complained,
said it was old, wouldn't carry this inflammable cargo.
Travel through the air, it said, that's the right way to go to Fargo
on the dead of winter dance party tour. Mysterious travel
it was that could affect you like this, make certainty unravel
and chance loom large and baffle: unfading, the quickening sound,
but lost in Iowa, on the coldest-ever snow-covered ground.

SYMBOL OF A NATION

its people in thrall
to the understated beauty
of the machair, hedonists
of rare days of sunsky,
donors of red earth

(bums who didn't have a mindset around productivity,
market-driven only in the most literal sense)

and losing their tongue as they go down
singing, showing the way forward,
as they survive, to a future
that will be flag-mad and transaction-packed,
that will have big bright flags to act as gags

hand on heart, I have no wish
to salute any flag

rather will I quote Jandl:
there's a fleck on the flag

and rather will I acknowledge
(see Prévert) the bloodied fox,
escaped from the trap,
in the snow,
dragging itself forward,
on three legs

Tunica County in '29,
Ginny Travis, Robert's bride
Was all of sixteen years old
When she and their baby died

Soon as Robert left the plantation
There was a hellhound on his trail!

Robert thought of jelly roll
Thought he could shake it all night long
But there was strychnine in his whisky
And man, that brew was strong

"I can do what the hell I like", he laughed
"Below the Jim Crow line"

The following are titles of, or phrases from, songs of Robert Johnson: Ramblin' On My Mind, blues fallin' down like hail, Hellhound On My Trail, Little Queen Of Spades.

You're colour- and steadfast, Jeff. True to red,
a real punter, putting through its paces
a worn-out but stubborn old thoroughbred.
It's good to see you're still at the races.

We now admit the horse we backed was lame
and had always been a rank outsider,
was an ageing charger with a noble name,
nobbled by enemies, failed by its rider.

In the coat you refuse to turn or pad,
right next to the heart, where the chill creeps in,
you keep the tattered betting slip. I'm glad.
We know what won and live to see who'll win.

Beneath the impassive gaze of the Madonna of Porto Salvo
bunches of carnations lie withered and dusty.

If you can believe the media, the island has been taken by storm
and the sea is full of corpses.

The smugglers talk to their cargo.
They say: Think of this island as a gateway.

It’s true its waters are lagoon-blue and the sand on its beaches is white,
but it has no refrigerated morgue.

Now they segregate themselves from the tourists.

The man who dug with his bare hands received no official thanks.

He put up crosses for people presumed to have been Muslims,
not knowing any other way to do it.

He said: “ No. 6 was a very beautiful woman, very tall.
She was dead on arrival”.


On this page, five poems from Edward Mackinnon's second collection Killing Time in Arcadia:
The Sound | Symbol of a Nation | Ballad of Robert Johnson
The Wager | The Gateway 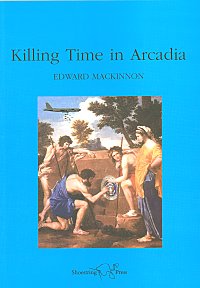