The world’s divided light shines first
in Westow (East Riding): a birth
the first to a couple that’s Jewish/
German/communist all this
a child whom they call Thomas
what’s first? communist/German/Jew-
ish what comes first is Westow
the place coincidence, the time
necessity 1945
the father who’ll betray him comes first
he who wanted only the best
for his displaced son this is how
the story began – in Westow

Before the Fathers, he would write,
the Sons Die this he knew about
he’d lived it before, just in time,
his father died (1989):
his success stories in the West
where he could do as he wished
with the big plans he’d always formed
to write novels to make films
and win what his father despised
and he himself the small prizes

In the Sight, he wrote,
of the Fathers, the Sons Die. Just
after the youngest son dies
he does too in his father’s eyes
the old existential schism
for this is said to have happened
he asked Honecker, who listened
to his story and said he too
had imagined socialism
unlike this, should he stay or go

He couldn’t escape the near past
post-war tripartite Berlin
Iron Angels moving from zone
to zone in freedom – his first film
low life in Germany the theme
he’d gone West where he didn’t want
to be, couldn’t stay in the East
– he wanted, he would write, to stay
(he’d crossed the line of no return)
only where he had never been

Such was the freedom of the West
and such was he, such was the West
when his word and film art was blessed
with official prizes of state
in the state where artists were free
he thanked – yes, he took the trouble –
Germany East’s Academy
where he’d learned his art, his fate
this was dissidence in double
but his true quarrel he defined
as what socialism what kind

His German passport he cast out
like a soiled devalued banknote
he’s a British “subject” from now
for his place of birth was Westow
(district of Norton, wapentake
of Buckrose, county of York)
and he called himself in the West
a citizen of Germany, East

where they published his plays at last
where they were learning but not fast
enough where the divided sky
fell in after his father died
whom he’d betrayed who’d betrayed him
his people were now free to do
what others wished to do with them
he reasoned for he had lost them
and in losing them himself too
he’d forfeited his role, his theme
subsidies lay under rubble
no need for a dissident clown
after the Wall had fallen down

It was about the past and murder
that follows you everywhere
– see the man in his film The Passenger
whose mistake fathers his despair
and shadows him in a world
that uses him, calls the money
he makes his art, makes him a cipher
at last

this happened in the past:

’68 and privileged kids
were protesting in the West kids
in the East who were privileged
protested too: the Russian bear
should leave Prague the red star
was sullied a privileged kid
with leaflets had the privilege
the doubtful one to be betrayed
by a Deputy Minister no less
of Culture a man with a past
that was impeccable émigré
anti-fascist and working class

What harm did prison do his art
much worse was the defeat of the heart
they permitted, father and son
a life that was Shakespearean
or when the Wall fell the suicide
of his tutor, and the girl who spied
on him in the good old dark days,
his lover, about the past
he wouldn’t talk he was lost
in thought, translating Shakespeare’s plays
in his last years far away
from what would be in Germany
as far away as anyone can be
from where and how it all began

The poet of estrangement. The poet of sickness.
The reading room of the British Museum. The cold alpine heights.
Religion as the illusory sun. Religion as slave morality.
The torn veil of the bourgeois family. The sexless life of the free spirit.
Boils on the anus. Syphilis.
Economic shit. The cult of the hero.
Preferred metaphor: birth. Metaphor of preference: disease.
The overthrow of all conditions in which human beings are oppressed.

Eternal recurrence of the same.

He was not knowingly not telling the truth.

And we were all so sure!
Yes, the knowing world knew the truth.

Who coined the testimony of the ambassador’s daughter?
How did a hundred corpses become a hundred thousand?
Did nobody verify the existence of bio weapons factories on wheels?

And trapped in the coach is the bird
you want to return as in the next life.

LETTER TO HIS MEMBER OF PARLIAMENT, 2005

He writes to his M.P., the Rt Hon etc.,
to tell him, as the country prepares to go
to the polls – it’s already gone, he says,
to the dogs – that he’s offering his services
– but first, by way of a preamble, he asks
the Rt Hon etc. to remind the Royals,
with whom the Rt Hon etc. mingles etc.,
to be more mindful of their manners,
viz. Prince Charles’s habit of shaking hands,
’s truth, with his left hand in his pocket,
and otherwise generally to brush up
on their English usage (examples quoted) –
his services in the unlikely event
of the Rt Hon etc.’s party winning
the election, which Bomber Blair’s bagged
already, and deigning not to repeal the ban,
his services, free of charge, naturally,
as a fox (he has red hair),

adding that,
despite having passed 60, he has oodles
of stamina and could easily set a trail
across the Sussex countryside for die-hard
foxhunters who after all only want
a bit of outdoor excitement.

Last year,
he says, he ran all the way to the top
of the Cheviot – about four times as high
as Ditchling Beacon – up in Northumberland,
which the Rt Hon etc. has no doubt heard of.

What took my breath and stunned and took aback
was the sheer weight and wanting to groan
when I helped lift the chair aboard the boat,

this even more than the half-startled seals
lolling on the islets near the shore
and the dolphins, ludic and quick in our wake,

more than the placid sea flecked by the sun
and the promised island under blue sky,
looming greener as we drew near.

No better place on the planet, said his father,
as he wiped the foam from the jerking mouth,
no fairer prospect on such a perfect day

across the water, but what stunned and took breath,
more than the wood of wild garlic and bluebells,
the cows on the white sand, the lamb on the cliff,

was wanting to groan, was bearing the weight
of that frame made of steel
and what it held of the weight of the world. 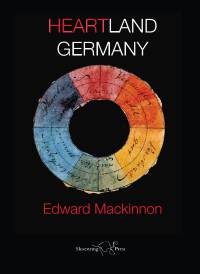